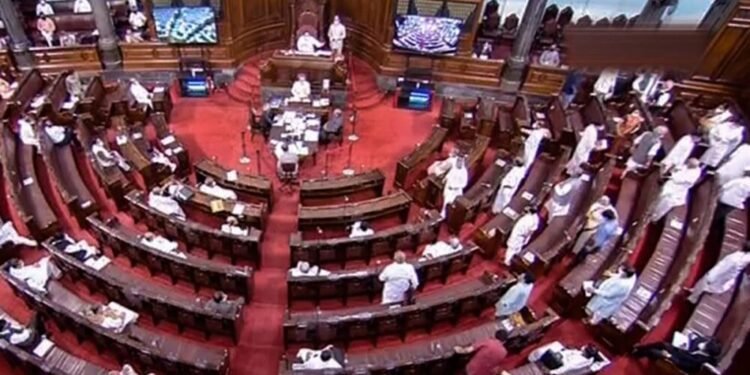 Opposition lawmakers walk out of Rajya Sabha on Tuesday,

With each passing day, the Parliamentary proceedings are seeing a new low. Amid Opposition boycott, Rajya Sabha passes seven bills. There was no parliamentary oversight, no bills being sent to committees for scrutiny. No MPLADS. No question hour. No major debates.
Most of the Opposition, comprising the Congress, Left parties, the TMC, the Samajwadi Party, and the NCP, decided to boycott proceedings for the remainder of the session in protest against the suspension of eight MPs.

Major opposition politicians Jairam Ramesh, who was also seen as vehemently protesting against the hurried passage of the Farm Bills on Sunday, tweeted to list the opposition’s demands.

“The government should introduce another bill which ensures that private players do not purchase beneath the MSP. On this, farmers can move court. MSPs should be announced using the Swaminathan formula. The state corporations and FCI should not purchase below MSPs. Our colleagues who have been suspended—their suspension should be revoked. Till the time the government does not take it back, we will boycott the proceedings of the House,” Azad said.

With such proceedings in the order it’s high time to ponder: Do we really need parliament with taxpayer money where the constitutional values and basic rights are have not been following? The efforts of the opposition to revive democracy ultimately fizzled and fell flat, with little to no movement on the ground by the government.

Several key opposition leaders such as Shashi Tharoor, Kanimozhi, and Adhir Ranjan Chowdhury protested against the contentious farm bills outside Parliament today. It is disappointing that after suspending democracy and rule of law GOI is suspending opposition from parliament.