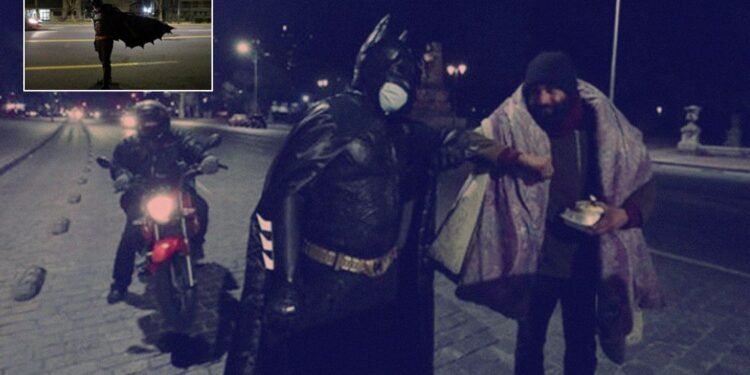 Lockdown and the Coronavirus pandemic have had the worst impact on society, mostly, the ones from the weaker sections of the society. This crisis is faced by everyone across the world. A country in South America, Chile is under lockdown for many months. A peculiar case of philanthropy in the country capital, Santiago has caught global attention. A man disguised as ‘Batsman’,  wearing a shiny batman suit, fully equipped with Covid-19 safety precautions like facemasks is out to help those in need, serving a few dozen plates of hot food to homeless people throughout the streets of South American capital on a regular basis.

Until now the unemployment rate has gone up to 12% in Chile which is the highest in the past few decades. During this economic situation, a resident of Santiago served humanity in a very unique way.
We all have come across Superheroes on television, movies, having superpowers to save the world from all kinds of problems. But that’s just a fantasy, in reality, there aren’t any superpowers.

Homeless People of  Chile experienced the service of their superhero, through regular service of hot plates of food to help them sustain post-pandemic. His aristocratic gesture won him local recognition, but the man chooses to be unnamed.

This superhero revealed his inspiration for this noble deed. “Look around you, see if you can dedicate a little time, a little food, a little shelter, a word sometimes of encouragement to those who need it”, he said. As for the look of Batman? He said it meant to bring good cheer and unity.

And despite the costume, Simon Salvador, one of the recipients of this philanthropy, said the true sentiment was clear. “It is appreciated…from one human to another,” Salvador said. We hope to meet many more real superheroes who inspire everyone to believe in noble wave and serve humanity.