ZEE5's new show 'Dhoop Ki Deewar' aired its first two episodes and here are two cents on what the show is all about.

by Buzz Desk
in Reviews, Series
1 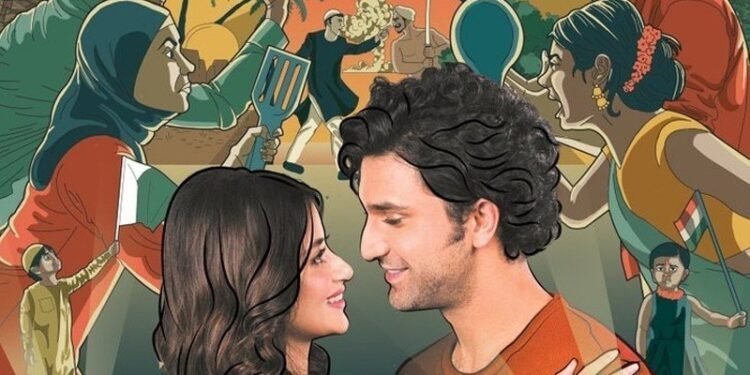 When two nations are at war, there’s only loss, grief, and pain. But, at the end of the day, it doesn’t really matter who wins, for people on either side suffer the same.

Tapping on this sensitive topic of peace over war and #heartoverhate is the new ZEE5 show ‘Dhoop Ki Deewar’. Released under the banner of Zee Zindagi (previously, a broadcasting channel in India that aired Pakistani dramas), Umera Ahmed writes the series; also the writer of Fawad Khan and Sanam Saeed starred Zindagi Gulzar Hai, and is directed by Haseeb Hassan.

The show stars the celebrity couple Ahad Raza Mir and Sajal Ali in the lead roles.

The show aired its first two episodes on Friday, June 25. While it’s too early to say anything regarding the show, here’s however a short review to highlight the points to look forward to:

The two strangers find each other standing on a crossroad when their fathers, Colonel Vijay Malhotra and Colonel Sher Ali, respectively, are martyred in a cross-firing at the two nations’ border.

In the first two episodes, the story is still establishing. But, starting with a parallel being drawn between an ongoing war and a very gripping India vs Pakistan cricket match, the show has gotten a hold of the nuances of either side really well.

A very articulate appreciation of people, fashion, content is seen back and forth.

Be it Vishal humming an Atif Aslam song, or Sarah’s grandmother (Samina Ahmed) being an ardent follower of Naagin (an Indian TV show), or the conversation between Vishal’s mother (Samiya Mumtaz) and her friend about the Pakistani dramas, it’s dialogues and its styling; everything points at the underlying message that we are all the same.

The story progresses as the two teenagers and their families handle the loss, pain, and grief. While the media on either side is shown highlighting the story of these martyrs, its insensitivity towards the families is equal.

The matter is over-sensationalized, leaving the two youngsters so emotionally charged that they get involved in a social media spat across the border trying to prove whose father was braver.

The emotions outrun their wits and people and media pick on their row from either side to create unnecessary propaganda.

While the show has done a decent job at holding up its viewers’ interest, it is very early to rate it. We hope the show continues to take the graph higher with episodes airing every Friday.

The finale will be around Independence Day weekend, which will be a great time to share the message.

Here are a few points that need to be highlighted:

Authenticity – The show has beautifully incorporated the little nuances that make it very authentic. Being shot entirely in Pakistan, the Indian story has been very smartly created. Be it the Amar Ujala newspaper or the Indian number plate on Vishal’s car, the reference of Naagin, or the pan shots of Amritsar roads, it does not look unreal.

Content – While it is a social tragedy, as the writer Umera Ahmed highlighted in her post, the storyline looks very crisp, simple, and tragic. Here’s hoping that it stays put.

Performance – In the two episodes that are available on Zee5, the performances so far have been good. Samiya Mumtaz, playing Vishal’s mother, deserves special praise for her portrayal of a strong Indian mother.

From her looks to her dialect to her emotions to her expressions, everything speaks volumes of how great a performer she is.

Ahad Raza Mir, however, is seen struggling with the dialect, and it feels a little unreal to see him play an Indian guy. It has perhaps more to do with the fact that we have seen him enough in dramas to overlook the fact that he is Vishal and not Ahad.

But since watching him onscreen always delightful, we shall wait for the story to move forward before judging too quickly.

Lens – The lens has been very smooth with what it wants the viewers to perceive. With every passing frame, the message that we are all the same despite the borders is very evident. The aesthetic shots, the parallel match cuts of both the households add to the narrative.

OST – While Pakistani dramas and shows are known for their original soundtracks, this one is not as instilling as it should have been. Judaiyan Kyon by Bilal Saeed will perhaps grow on us as the show progresses.

Also Read: 5 Series On Netflix Whose Next Season Is Coming This July!