Do we know that we aren't the only ones who are unable to decide which is better– Rockstar's plot or characters or songs? However, this time we are going with the impressive tracks to define this masterpiece. Plugin your earphones and get ready to feel Rockstar once again, this time through its music. 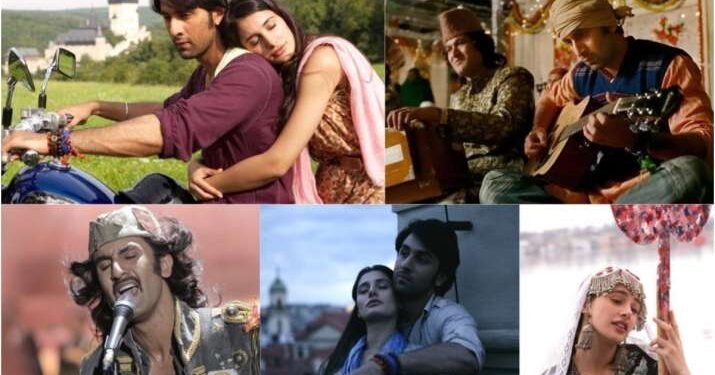 Rockstar has completed eleven years (time flies, we know!) A decade later, the timeless masterpiece is still as spectacular and magical as it was back in those days.

Probably one of the finest musical romantic dramas in the history of Indian Cinema, Rockstar is still the benchmark of artistic films that have a hint of realistic crises with its tragedy.

Imtiaz Ali’s film has something which remains unconquerable to this day– the albums of his movies. Whether it was Love Aaj Kal, Love Aaj Kal 2, Tamasha, or Rockstar– the tracks of his films are irresistible and capture the difficult side of human emotions.

So, as a tribute to all those melodies and songs, let us watch Rockstar once again, but in a totally different way— defined by its songs!

The film opens with Janardhan Jakhar (Ranbir Kapoor) struggling with some goons and running away to his concert. Then the scene cuts back to his college days where he is observed singing the same song.

We get to know that at some point Janardhan was a typical college guy with aspirations of being a star. Jo Bhi Main characterizes his helplessness in expressing himself.

The irony of his words complicating and misconstruing his emotions further is conveyed in the lyrics.

What makes an artist a true artist? Khatana says to Janardhan that it is the heartbreak that is common in every artist. On his way to understanding that sentiment, he proposes Heer, who rejects him but they soon become friends.

We see some of their beautiful moments with the song playing in the background, neither of them aware of their love for each other yet.

Janardhan is still more eager to feel that same heartbreak than realize his love for the girl.

Janardhan was not always arrogant and fierce, he was once a simpleton and life were not always fair. His brother hurls him out of the house, accusing him of stealing money.

This scene portrays how heartbreaks received through family damage us more than those by lovers.

No matter how many songs we listen to, only Kun Faya Kun has the power of giving our hearts that satisfaction. The chills down our spine after listening to Kun Faya Kun and believing that when everything goes wrong there is a supreme power looking after us, because “Be and It Is!”

Phir Se Udd Chala marks the beginning of Jordan in him. Heer is married to a man in Prague. However, she still has feelings for JJ.

Phir Se Ud Chala portrays his journey with Heer, struggles in his own life and career, and the fun time he had with his friends.

JJ is finally enjoying his life and has become an eminent singer. His life has come to a standstill and we see him stable until he meets Heer once again

Heer and Jordan meet in Prague where Heer reveals that she is suffering from some health issues. When the two talk about her marriage, it is evident that Heer is unhappy.

Jordan sings “Aur Ho” passionately in a concert where Heer is also present and we can catch a drift of that old flame of love between the two of them thriving again.

As their friendship gets intimate, Heer is dealing with her own guilt and decides to leave.

When Heer rejects JJ and the police take him for trespassing charges pressed by Heer’s husband, JJ has finally morphed into Jordan– a man who has nothing to lose and is ready to go down the path of self-destruction.

We see the frustrated and angry artist singing violently about his rights. All Jordan wanted was to live a happy life with a girl he loved; however, sadly, he was deprived of it.

Jordan comes to know that Heer has finally taken divorce and her health is declining. The two confess their love for each other and we see them living their life to the fullest.

They went together to Himachal where Jordan had his first concert. Unfortunately, Heer’s condition deteriorates and she is rushed to a hospital where she falls into a coma. Jordan is miserable and unable to escape from the guilt as Heer’s family accuses him of her condition.

Nadaan Parindey encircles his entire life and how he doesn’t want anything from it except for Heer’s recovery. However, recognizing her condition, he realizes that Heer will not make it out alive.

Evolving as the ‘bad boy’ of rock, he abuses the media, beats the police, and soon gains international fame like his idol.

In the end the film switches to the present, we see Jordan standing still in the middle of his concert and Heer walking towards him.

This is a symbolic manifestation of Nadaan Parinda i.e Heer returning home– reuniting with Jordan, not physically but spiritually.

The film ends on a profound note that the person we love never truly leaves us and even if we cannot see them, we can always feel them.

Also Read: What The Cast Of Breaking Bad Would Look Like If It Was Made Today