Salman Khan’s Bodyguard Completes A Decade Today But Do You Know These Facts About The Film?

The box office hit of 2011, Bodyguard starring Salman Khan and Kareena Kapoor, celebrates its 10th anniversary today, and here is some trivia about the film you probably didn’t know.

by Mahvish
in Listicles, Bollywood, Movies
1 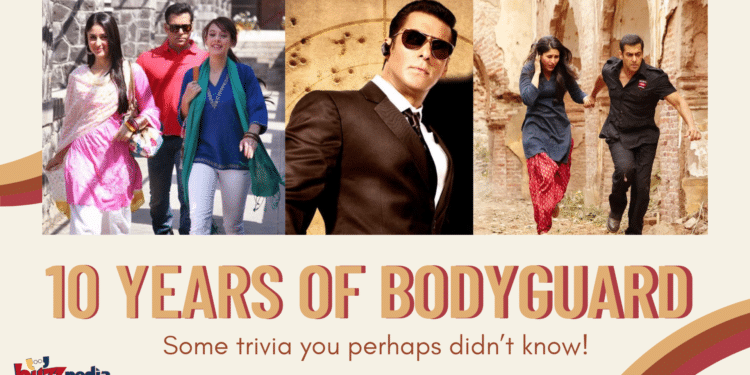 This Hindi romantic action-comedy, a typical genre Salman Khan deals in, was one of the biggest grossing movies of the year.

On the 10th anniversary of the film, here’s a little trivia you probably didn’t know about:

2. Being a major hit, the film broke one too many records on its release, becoming the highest opening day grosser, the biggest grosser ever for a single day, and even set a record for the highest opening week grosser for Bollywood up until that year.

3. The movie was Salaman and Kareena’s first hit together. They had previously collaborated for movies like ‘Kyon Ki’ (2005) and ‘Main Aur Mrs. Khanna’ (2009), which didn’t do well.

4. Salman Khan offered the role of Lovely Singh’s father to his good friend Sanjay Dutt, but he declined because he felt there was not much visible age gap between the two. The role was later slacked off.

5. Before Raj Babbar was signed to play, Kareena Kapoor’s father, Shatrughan Sinha, was offered the part, but he said no since he wanted to play father only to his own daughter Sonakshi Sinha.

6. The film marked the debut of Hazel Keech as Maya, Divya’s friend. Hazel is now married to cricketer Yuvraj Singh.

7. Nayantara, part of the original Malayalam movie, was also offered the role in its Hindi remake, but she refused to play the same role again.

9. Aditya Pancholi as the antagonist in the film was signed much later, and the movie also marked the first-ever on-screen pairing of Salman Khan and Aditya Pancholi.

10. The soundtrack album is by Himesh Reshammiya, who had last worked with Salman Khan in ‘Kyon Ki’ (2005), after which they had a fallout.