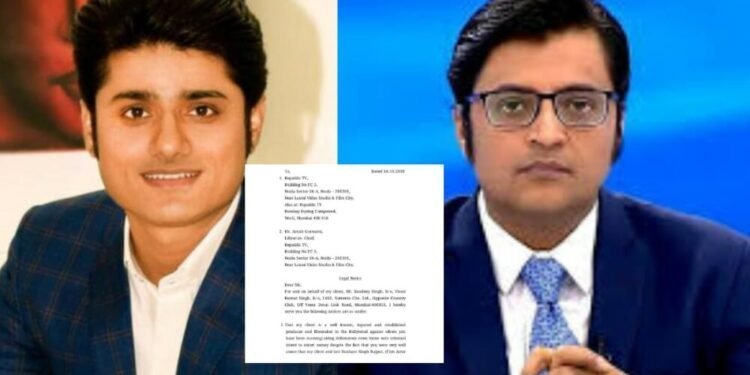 Sushant Singh Rajput‘s friend Sandip Ssingh who has been in the news since the untimely demise of the late actor has now sued Journalist Arnab Goswami and news channel Republic TV for defaming him on National television.

Sandip Ssingh took it to Instagram on Wednesday and shared the legal notice and wrote, “It’s Payback time @republicworld #Defamation #EnoughIsEnough”. In the notice, there is a mention of all the incidents when Journalist Arnab Goswami and Republic TV defamed him and alleged him with criminal intent to extort money from the late actor, and it was mentioned in the notice that he was aware that Sushant and Sandip knew each other from their struggling days.

The notice has highlighted a series of programs carried by Republic TV which are stated to have defamed Ssingh.

The notice points out that in one media segment, a panellist had stated that Ssingh “insisted that the ambulance” carrying Rajput’s body “will go to Cooper hospital” and that Sandeep Ssingh’s PR had clicked a picture to spread in the media.

The notice has asked for the channel to remove all malicious footage, articles and reports about Ssingh and to tender an apology, which should include true facts about Ssingh’s integrity.

Ssingh has also demanded the payment of Rs 200 crores as compensation from Republic TV. If he notice is not adhered to within 15 days, Ssingh has informed that proceedings would be filed in court seeking damages for defamation.

Top 10 Deadly Yet Adventurous Railway Routes Across The World

Top 10 Deadly Yet Adventurous Railway Routes Across The World