by Shiva Chaudhary
in Buzz, News
0 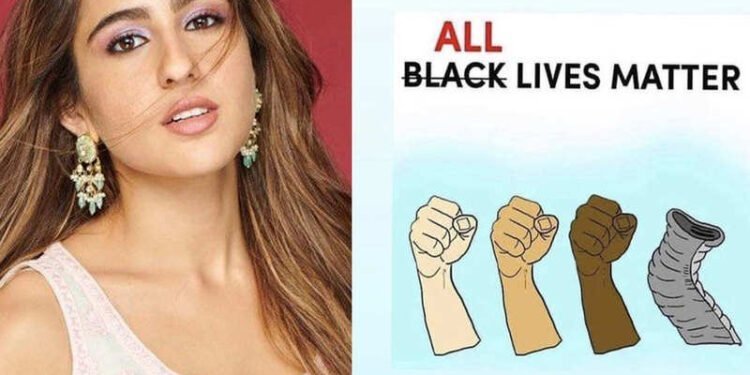 Bollywood actor Sara Ali Khan recently received a lot of backlashes on social media for her ‘All Lives Matter’ post on Instagram. Seeing the strong criticism the post was later pulled down by the actor.
The now-deleted post featured three hands showing different skin colors (white, brown, and black) and an elephant trunk raised in defiance. The post came out with a message of ‘Black Lives Matter’ but the word ‘Black’ was scratched out to read ‘All’. This post came a day after the celebrities stood in solidarity with people protesting the custodial killing of George Floyd and other ruthlessness against African-Americans around the world.
After the post came out it created an outrage among the Twitterati, who slammed her for being callous and problematic at a time when the world is furiously debating race-based violence.
Some tweets read,
“Sara Ali Khan is a prime example of how privilege can give you the access to education in one of the best universities but not brains to apply that and learn from there”, tweeted a mess.
“Sara Ali Khan, a history grad from Columbia, not only accessorising a black model in one of her shoots but also supporting all lives matter on a platform where she has a significant following is further proof that going to an ivy league doesn’t necessarily mean you’re smart”, tweeted today’s urban youth.
Another user Priley tweeted, “Of course she crossed out Black and then reduced it down to animal rights…that political science degree looking real good, Sara Ali Khan”.
However, several others supported the actor’s stand and saw nothing abhorrent with the post.

In support of the actor another twitter user, Deeksha Thakur, tweeted, “Finally some celebrity made the sensible comment. Every life matter inspite of caste, creed, colour, religion, rich, poor, animal every single soul.Whether it is Sadhu, George Floyd, or pregnant elephant”.
Not only, Sara, many other celebrities have also been tweeting with the #AllLivesMatter hashtag.
Also, Bollywood stars including Karan Johar, Vicky Kaushal, Sara Ali Khan, Ishaan Khatter, Karima Kapoor, and many others joined in and shared a black box on their social media handles to mark #BlackoutTuesday.