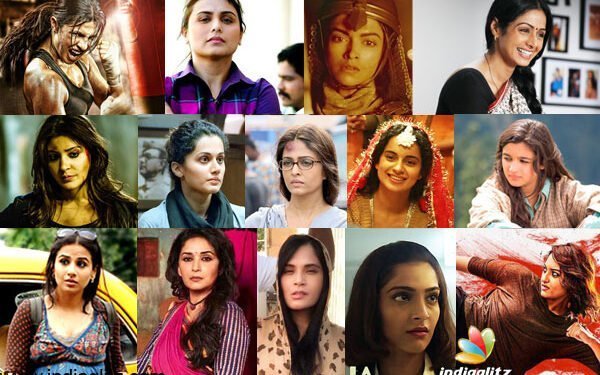 Bollywood is often blamed for its dearth of strong female characters. Women in mainstream cinema are usually employed as a showpiece that attracts the male gaze or a damsel in distress who is every-now- and-then saved by the hero, just to eulogize the hero’s masculinity. The criticism has only begun recently and the audience has very recently become aware of how problematic such representations of women are. But Bollywood hasn’t failed to give the audience some beacons of hope. The film industry has been able to produce some female characters that stand strong and have earned a tonne of respect from the audience.

The character of Shashi from English Vinglish represents the reduced self-worth of an Indian housewife. The indifference of Shashi’s family towards her and her efforts to make them happy bothers her, she does not passively accept it as her fate but tries to prove that she’s not what they decide her to be and that it is she who only decides what her worth is. Her attempts to learn the English language was a journey of self-discovery.

Deepika’s portrayal of Piku is important because Piku represents women as dependable, responsible, and self-sufficient. Piku makes her personal decisions, takes care of her father, and also has a successful career. The character also needs to be appreciated for a very realistic representation of modern India and not try to stick to the archetype of a carefree and wild female represented as the modern woman.

Meeta is one of the very few leading ladies of a romantic comedy who isn’t attributed as conventionally beautiful, timid or bubbly, sweet innocent, and other such things. She is characterized by her genius, and her unapologetic quirkiness is not “cute” but rather weird. Another important aspect of her character is that she is flawed which makes her more human and less of a stereotype.

Tapsee Pannu’s Amrita from Thappad is initially represented as the embodiment of all married womenmof the country who consider their life to be marital bliss. But her husband’s slap works like a wake-up call for her, it opens her eyes and makes her question only the act of physical violence but all forms of discrimination she’s been subjected to in her marital life. Amrita’s realization of her secondary status in her marriage leads her to decide not to overlook the slap which “wasn’t a big deal” and being aware of the possible repercussions of a divorce, she goes ahead with it.

Waheeda Rahman’s Rosie, given the character, is not recent and was path-breaking. Being married to an archaeologist who is indifferent towards her, Rosie feels neglected in her marriage. Dancing, which is her only refuge is something, her husband doesn’t approve of but she doesn’t hesitate to dance because
of her husband’s opinion. She doesn’t overlook his infidelity and walks out of the marriage. And when she becomes a performer, she doesn’t let her lover take advantage of her earnings and calls him out on it. Proving that she was aware of what she wanted and went right ahead for it.

Geeta was an individual of strong ideals and principles, having lost her parents, she was fulfilling their dream of running a school in the village and took care of her little brother all by herself. She refused to marry a man with whom she has ideological differences and stood her ground against all who doubted
her capabilities both as an individual and as a woman. Even when it came to being with Mohan, she refused to leave her country since she believed that the people of India should stay within the country and work for its progress at the grass-root level.

The nameless laborer from Udta Punjab was a woman of real conviction. Through the course of the film, we see her going through a lot of pain and suffering but she keeps striving, even when she continues to fail, she does not give up on her life. Having been captivated, drugged, and raped, she not only kills her
captives to free herself eventually but is also able to overcome her drug addiction all by herself displaying her intelligence and psychological strength.

Aisha from Wake Up Sid was a subtle representation of a self-sufficient individual. She moves to a new city, finds herself a place to live, keeps working for her dream career, all by herself. She does have friends but never does she depend on any of them for anything. She experiences her life without any inhibitions as a woman.

Revenge is usually seen as male territory, Mom is a story of revenge. It is about a woman taking revenge on men who violated another woman she loved. The film surpasses the aspect of motherly love and agony branching from it when a child is hurt because Devki, played by Sridevi, isn’t related to Arya by blood but there is an element of female affinity. Devki’s revenge is as violent and as brutal as the men’s
crime, perpetuates the image of a woman as fierce and full of wrath rather than only being warm, calm, and loving.