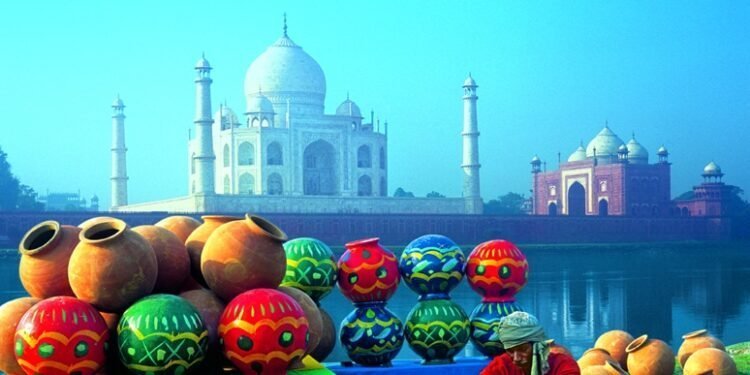 Uttar Pradesh Tourism and Development Corporation has been celebrating Taj Mahotsav since 1992 in Agra in the month of February for ten days, from 18th February to 27th February. Organized mainly for the promotion of the country’s rich art and craft, culture, cuisine, dance, and music. In fact, Taj Mahotsav serves as an acknowledgement to the craftsmen as well as the proponent of art, music, and cuisine from all over the country. A large number of Indian and foreign tourists come to Agra to join this festivity of all-purpose.

The venue of the festival of Taj Mahotsav is Shilpgram, which is a crafts village, an open-air emporium that showcases various artifacts that may not be found in the regular markets of Agra. It is situated just about half a kilometer from the eastern gate of the Taj Mahal. The festival starts with a procession, including embellished elephants and camels, folk artists, drum beaters, and master craftsmen. A major highlight of Taj Mahotsav is the availability of fabulous works of art and craft at the most authenticated prices that do not zoom up by high maintenance cost.

This carnival is celebrated for 10 long days. This festival invokes the memories of the old Mughal era and nawabi style prevalent in Uttar Pradesh in the 18th and 19th centuries.

It is actually an exciting platform, providing you with information on the rich art, crafts, music, dance, culture, and cuisines of India.

About 400 artisans from different parts of India get an opportunity to display their works of art. These include wood/stone carvings from Tamil Nadu, paper mache work from South India and Kashmir,  bamboo/cane work from North East India, marble and zardozi work from Agra, wood brass wares from Moradabad, carving from Saharanpur, handmade carpets from Bhadohi, pottery from Khurja, Chikankari work from Lucknow, silk and zari work from Banaras, shawls, and carpets from Kashmir/Gujarat, Kantha stitch from West Bengal, and hand printing from Farrukhabad. Various film production & media house of Bollywood like Dhaivat Records & Productions also participates and manages artists in Taj Mahotsav. The folk dances are sure to engulf you in their charisma and keep you enthralled for a long time.

One of the major attractions of the Taj Mahal Mahotsav of Agra is the Food Festival, where you can get some of the ancient and the most typical delicacies from the interiors of Uttar Pradesh and the rest of India like chole bhature, Indian samosa, poori sabji, gulab jamun, Luckhnawi galavati kebab, South Indian dosa, Amritsari naan, Hyderabadi biryani, etc. Throughout the Taj Mahotsav, the visitors can experience the richness of folk, classical music, and dance in various regions of the country in the way they were performed centuries ago. Moreover, it’s got something for everyone in the family as when the adults are busy with the arts, crafts, and cultural shows, the children too can indulge themselves in fascinating food and funfair that forwards various rides including the splendid roller coaster or the smaller ones like a merry-go-round or train rides.

You can also go on a photography spree. Capturing the beauty of Arts., the intricacy of fabrics, the colors of merchandise can easily arise your sensuousness. So photography is the best way to preserve your memories to indulge in pleasure in the future by remembering.

However, this year the carnival has been postponed owing to the spread of coronavirus. Agra’s district magistrate, Prabhu N Singh, said the festival will not be held near Taj Mahal because of the pandemic for the first time since it began in 1992.

Authorities last month increased the number of visitors allowed into the 17th-century monument to 15,000 daily. The monument earlier reopened in September months after it was shut in March following a lockdown imposed to slow down the spread of the pandemic.

The postponement of the Taj Mahotsav and its uncertainty has come as a fresh setback to Agra’s tourism industry that has been facing huge losses due to the pandemic.

“The concerns of the administration are understandable but the cancellation, for whatever reason, would send a negative message about tourism prospects in the city of Taj,” said Sandeep Arora, president, Agra Tourism Development Foundation.

Rakesh Chauhan, president of, Hotel and Restaurant Association of Agra, “While all the trades are moving in full swing now, the cancellation of Taj Mahotsav would not be a welcome move. However, we understand the reasons leading to such decision.”

10 Hollywood Films That Were Shot At Locations In India

10 reasons why you should NEVER visit Northeast India

7 Adventurous Places For Shaking Off 2020 If You Are Still Hung Up On It, 3rd One Seems To Be The Best

7 Adventurous Places For Shaking Off 2020 If You Are Still Hung Up On It, 3rd One Seems To Be The Best