A masterpiece of the Bollywood industry, Tamasha still remains a classic. The cinematography, story build-up, plot, characters, and of course the songs– Tamasha is a compilation of the finest in each field. How intriguing would it be to define this romcom by its songs?

by Anamta Husain
in Music, Listicles
3 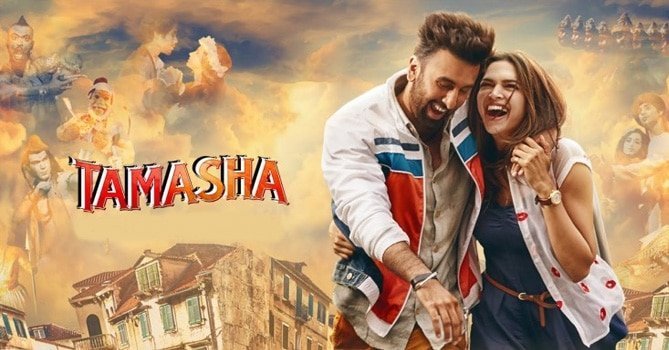 It has been 6 years since Tamasha was released. And for reasons unknown, the film remains one of the most underrated films of the industry. Ved and Tara’s story was not just theirs, it was every human’s story who has succumbed to the robotic life of today.

Tamasha guides us to uncover our true identity and make our own way to the world rather than following the herd where society makes a ‘Tamasha’ out of each of us.

Remember the puppets in the movie? They actually linked our condition in the society where we are played and swayed like a puppet.

Tamasha was not your everyday love story with a quest to find oneself– with all its adventures and upbeat scenes– it touched upon topics like identity crisis and existentialism. It was a storyteller’s movie and a writer’s movie but most importantly, it was a story for each one of us.

It is a movie for every artist who has disguised himself under the pretense of being happy with his desk job– the lies, the tales, and the made-up stories we tell ourselves to comfort or rather suppress our ambitions.

To revive all that once again, this post is about Tamasha but defined by its songs–

The movie begins with Safarnama or ‘travelogue’, going back in time to when Ved was a kid growing up in Manali.

This scene introduces the enigmatic and interesting character of a storyteller who keeps stirring his stories together. We can see little Ved fascinated by these tales and his love for imagination is vivid.

Chali Kahani defines the Tamasha in Ved’s life– all the stories he heard, the plays and theatres he watched, the movie shifts to the present where Ved is all grown up and the story moves to Corsica!

When Ved met Tara or should we say When Don met Mona Darling, it promised us of a love story without actually announcing it.

Their chemistry and the crazy vibes that the two emanate are apparent throughout Matargashti. Ved and Tara can be whatever they want to be when they are together as strangers and soon they develop a romantic friendship…

It appears that what happened in Corsica stayed with Tara even after Corsica. Returning to her old life made Tara realize how much she yearned to be the person she really was.

On an eventful day, Tara met Ved once again in Delhi and she was ready to give her 100% this time to their romantic bond but she was still looking for that same carefree and humorous Ved.

Ved and Tara began to date but Tara found Ved to be stuck in a loop of monotony and tedium while the Ved she met in Corsica seems to be hidden under layers of responsibilities and normalcy.

She confronts Ved about the same and rejects him when he proposes to her and this triggered Ved’s mental disorder and identity crises.

He meets a rickshaw puller who tells him how he crushed his own dream of becoming a singer to earn his livelihood. Wat Wat Wat was sung by the same driver as we see Ved plunge into endless thoughts and possibilities.

Alka Yagnik and Arijit Singh created a heart-breaking melody filled with a rollercoaster of emotions where there is love, separation, regret, and heartbreak as Tara try to stop Ved from leaving but Ved is adamant as he is once again lost and unable to find his true self.

At this point, he is not in a good position to be with Tara and we see an existential crisis engulfing him.

Ved’s instability rises and he leaves his job after pondering over what he actually wanted and misbehaving at one of the presentations. Unable to figure out his ambitions, he went back to Shimla and met the storyteller.

Tu Koi Aur Hai portrayed Ved’s feelings and the path to the revelation he was shown by the storyteller as he went back to his estranged father and family to narrate how he felt.

His father finally accepted Ved’s dreams and allowed him to follow them.

As Safarnama plays once again, the circle of tedious life is finally broken, and Ved and Tara are on their way to writing their own stories.

They have taken hold of their life and Ved has finally recognized how important it is to lead one’s own life.