by Benjeer
in Buzz, Opinion, World
0 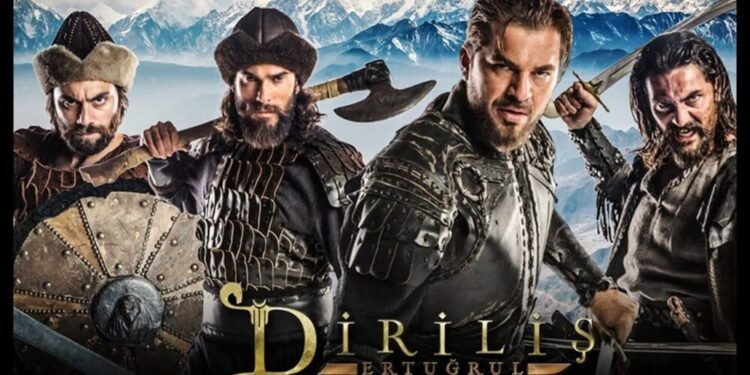 1
SHARES
0
VIEWS
Share on FacebookShare on TwitterShare on WhatsApp
It was March 2020 when the government announced that everyone will be inside their house till the next announcement due to a worldwide pandemic. Yes, it was the 24th of March when a strict lockdown was announced. People were looking at ways to spend their time at home.
Some resorted to cooking and some to their basic hobbies like painting, drawing, reading, and so forth.
When the entire world was in distress about the coronavirus and bored at their home there came a savior in form of a web series Resurrection Ertugul. Within no time this Turkish drama took the entire nation of India, Pakistan, and Bangladesh under its patronage.
Dirilis Ertugrul has far-reaching popularity with audiences in 60 countries including South America, the Middle East, and South Africa. The Series was written and produced by Mehmet Bozdug and directed by Metin Gunay from 2014 onwards. The theme music is by Alpay Goktekin. To help with choreography, production teams from Hollywood were invited to Turkey. The serial has been shot in Riva, Turkey where a special set was produced for this purpose.
The lead pair of the series Esra Bisligc and description Engin Altan Düzyatan became the overnight sensation of social media and online portals alike globally.
So what was there in that drama which got everyone hooked to their respective phones or TV sets? Here in this write-up, we will take a deep dive into the pool of Resurrection Ertugul.
Since ages, Muslims have mostly been shown “through the gaze of negativity” in TV series, films, and nowadays narrative of media is the icing on the cake. Hence the show marks a welcome change and combats Islamophobia. Vilifying Muslims amidst pandemic continued in India.
Take for example the recent spate of historical Indian movies; Alauddin Khilji the historic ruler of the Delhi Sultanate is projected as a crazed, carnivorous barbarian in the Bollywood movie Padmaavat. Therefore Muslims craved a powerful and positive depiction in the media. And Dirilis Ertugrul seems to have satiated that desperation to see a glorifying depiction of Muslims. It is widely popular across the Muslim world and the Middle East for glorifying Muslim heroes. Surprisingly non-Muslims are also great fans of Ertugrul, setting aside any cultural bias to enjoy the show for pure entertainment.
The show’s popularity is not limited to the masses but also to dignitaries too. Venezuela’s President, Nicolas Madura is an avid fan and was seen happily wearing the hat of a Turkish warrior or Alp on a recent visit to the sets and so was Pakistan’s Prime Minister Imran Khan.
There are five seasons of Dirilis Ertugrul – Only 2 seasons were released on YouTube, and all the seasons were released on Netflix, the global video streaming platform. The series is based on the life of the 13th-century Muslim Oghuz Turk leader Ertugrul, whose son Osman Ghazi is considered to be the founder of the Ottoman Empire.
It depicts the bravery of Muslim Oghuz Turks fighting the Mongol invaders, Christians, Byzantines, and the Knights Templar in Anatolia. A strong emphasis has been placed on Muslim scholars, and Islamic jurisprudence bringing out unique and well-thought solutions to the complex problems faced by the characters. The solutions are based on the life of the Holy Prophet (PBUH) and Hazrat Ali (A.S.). Each episode delivers both spiritual and life lessons by allowing principle characters to talk directly about moral dilemmas and their resolution. The people were hooked to their screens during its streaming in India and Pakistan alike during Ramazan due to its moral and spiritual message being conveyed.
Another feature is the use of alims or scholars; in the earlier seasons, a fictionalized version of renowned Islamic scholar and Sufi, Ibne Arabi, is seen advising Ertugrul, while the later series show the local Imam or Khoja gives guidance. The most notable lessons from this serial are: maintain your orientation towards establishing justice, protect the innocent, trust in God, and never give up. Perhaps the most popular quote is “The victory is not ours, it belongs to Allah”, a sentiment that resonates deeply with many Muslims.
The women of the story also provide an intriguing change from the usual orientalist stereotypes of Muslim women hidden in homes.
The women often act as Beys or chieftains in place of their husbands and brothers as required, they fight with swords or daggers and won’t quietly marry any man chosen for them to please anyone even if it’s a sultan. There have been queens throughout history who defied the pressures of the times by ruling independently.
The character of Halima Sultan, Aykis, Saljan, Haeme Hatun remain in your mind even after a long time. Ertugual is thoroughly entertaining and represents universal values of good over evil and surviving tough times through perseverance and that can revive the spirit no matter what your faith is or isn’t. Apart from this, The way actors performed their character, the way they fight and all the action sequences were very good.
Ertugual changes your spirit and shifts your mindset as you watch it positively. You see the personification of wisdom, bravery, persistence, deep faith, and brotherhood playing out in real-time. It humbles you. It influences you. Amid the raging debate, the Muslim world hopes that Ertugrul will inspire people to make a better place to live in harmony and peace.
ADVERTISEMENT
ADVERTISEMENT
Loading...
Advertisements
Tags: #2020Coronavirus lockdownCOVIDcovid19Human RightslisticlespoliticstrendingUSAWORLD
Previous Post