One of the most beautiful and touching American films I've watched in recent years is The Florida Project. Read why I believe it is a must-see for all the movie buffs. The film is available on @primevideo and @Netflix. 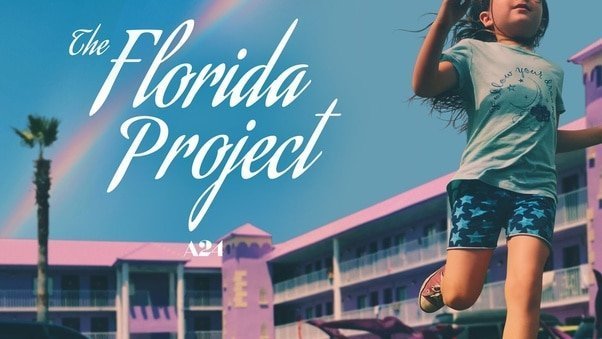 At one point, Walt Disney World in Florida was known as the Florida Project. It’s an apt title for this picture, as the theme park, called “The Most Magical Place on Earth,” plays a pivotal role in the story despite only being seen on screen once. The Florida Project is more intrigued by the low-income neighborhoods on the city’s outskirts and the lives of children growing up there than in the “magical place” itself.

The Florida Project is one of the few films that tries and succeeds in capturing the effects of income inequality on children. Director Sean Baker approaches the subject with the sensitivity it requires, never attempting to focus on the kids’ anguish or their predicament.

He depicts their lives with unflinching realism, following them around as they go off on their little excursions, unconcerned with the rest of the world or the complexities of the situations they find themselves in.

Despite having a little budget, The Florida Project made excellent use of the resources available to produce a well enough picture to compete with big Hollywood productions.

The film shot nearly entirely on location, takes advantage of the motel’s unique and peculiar appeal to produce a visually distinctive and highly satisfying visual experience. The film is also a masterclass for all aspiring filmmakers, as it teaches them how to make amazing independent films.

The filmmakers were so concerned with the film’s realism that they went out of their way to find the best performers for the lead roles. Halley, Moonee’s single mother who struggles to find a job and keep a roof over her head, was offered to a formerly non-acting Bria Vinaite based primarily on her Instagram page.

Sean Baker, the director, said he saw her Instagram page and thought they could find someone like her for the role of Halley. They eventually contacted her to see if she was interested in acting, and everything worked out well for everyone.

Willem Dafoe‘s performance as Bobby Hicks, the kind, fatherly, and compassionate manager of The Magic Castle Motel, is also a film’s highlight. He wonderfully inhabits the role of a confused manager, perpetually torn between his care and affection for the hotel tenants and his managerial responsibilities. It’s a refreshing change of pace from the majority of his past performances, in which he plays more intimidating characters.

The film’s main strength, though, is the kid’s performances. I’ve seen several films with children as protagonists, but this one has some of the best actings I’ve ever seen.

Moonee, the six-year-old protagonist, is an absolute revelation who somehow knows (or can probably just properly pretend to comprehend) the subtleties of the numerous emotions. Her performance in some of the sequences will most likely leave you speechless. That’s exactly what happened to me.

The filmmaker wants to draw our attention to the obvious but usually disregarded irony of the awful living conditions of the kids living closest to that destination by setting the story around one of the most popular fantasy destinations for children in the world.

The idea of a theme park serves as an excellent metaphor for these societal divides, and it is skillfully woven into the story in a variety of ways to heighten the impact. It’s best observed in sequences where the kids go on everyday excursions that, in their innocent way, directly or indirectly duplicate iconic attractions and experiences at Walt Disney World.

The Florida Project demonstrates that excellent cinema does not always demand elaborate sets, a well-known cast, or even a traditional plot structure. Great storytelling can sometimes be as simple as having a sympathetic instinct to follow the lives of some individuals with utmost honesty and unearthing extraordinary beauty in the most mundane settings and circumstances.

It’s also a reminder that the most powerful kind of social-political commentary in cinema is just presenting us the exact truth about the world we live in, rather than preaching or overtly discussing the themes.

Also Read: Selena Gomez, Happy Birthday! Here Are All Of The Reasons Why She Inspires Us