This has been one of Netflix’s flag bearers of the teenage rom-com genre. And the wait is finally over. Here’s how we feel about the last part of The Kissing Booth Trilogy. 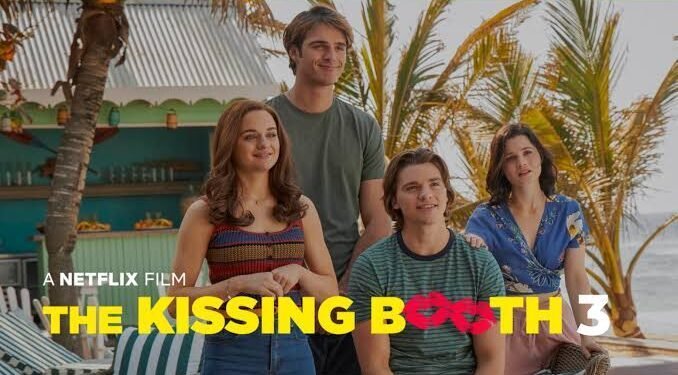 You know the feeling when you follow something, whether you like it or not, and it eventually becomes this tiny part of you, and when it finally comes to an end, you suddenly feel so hollow, like it really meant a lot in the first place?

No? Perhaps it’s just me.

Well, this is exactly what I felt when I completed watching the final part of The Kissing Booth Trilogy. I have not really been a fan of the movies, but that’s something I’ve been watching since  The Kissing Booth 1 came out in 2018. I don’t exactly remember why I started watching it; it was more out of boredom and having nothing to watch. Then The Kissing Booth 2 came out in 2020, and the pandemic had already gotten the better of us, so I watched it out of ’a moment of relief’ in the gloomy lockdown. I felt pretty nice after watching it. It was a good watch and definitely better than the first one.

So when the third part was announced later last year, I was excited to see how it would conclude. The Kissing Booth 3 came out on Wednesday, 11th August 2021 and is now streaming on Netflix. Here’s not a review; here’s what I (someone who’s followed all the movies and has actually matured in these years) felt while watching.

Disclaimer: This is not a movie for people who find teenage romcoms stupid or lame. This is for all those who’ve been a part of the journey.

The movie picks up from right where the second one ended. It’s the summer after the graduation of Elle and Lee, and all three of them get to spend it at the Flynn Family’s Beach House. That sounds like a peaceful and well-spent summer? But that’s the peace and calm before the storm. There’s a lot that goes on: Elle has to pick a school between Harvard and Berkeley.

Which would eventually mean choosing between Noah and Lee, Lee has to enjoy his last shot at having the best summer at the beach house and has to plan out how he would keep up with his and Rachel’s long-distance relationship, Marco is back in town, Noah has to tolerate Marco and not let his wishes come in between Elle and her decisions, and there’s Elle and Lee’s Beach Bucket List. Yes, a lot is going on. To know what actually happens, you have to watch the movie.

Here’s, however, a bunch of things I really liked, no spoilers:

I liked the fact that the earlier two movies were all about Elle’s relationship with the two Flynn brothers.

But through the course of this movie, it becomes more about what she is and wants to be. The film focuses more on her exploring herself not as Lee’s best friend or Noah’s girlfriend but what she’s passionate about.

It brings back Marco showing how he was an important character and not just a filler for a good looking charming boy when Noah was away.

It shows how these teenagers are growing up and embracing their flaws. It really shows how one matures with age and experience.

It explores many emotions, but one that stays longer with the audience is how the movie deals with handling failing relationships and people moving out of one’s life. It beautifully highlights how all people that we come across in our lives mean something in the bigger picture. The emotions that run through when the people who love each other the most fall apart show very realistically that not all relationships are meant to last forever.

Especially pointing out how ‘the over romanticised high school sweethearts who stay together forever’ is a complete sham. People grow, fall apart and move on. That’s just how it is. To sum it up, in Elle’s words, ‘People pass through our lives, some fade into memories, but a few of them become a part of who you are.’

All in all, it’s a good one time watch. I would suggest you give it a try and if you do, let me know your views in the comments section below.