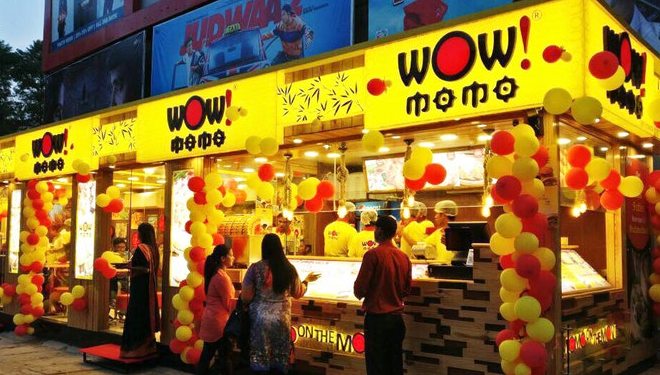 If you are a Momo lover, you must be versed with India’s fastest-growing food chain- WOW MOMO. From the ambience to the food quality it has got everything best to serve you with! But do you know how did India’s first Momo Chain started to sell exclusively over 100 varieties of only Momos and nothing else? If not….continue reading 😉

Momos are something that instantly satisfies your cravings and with this thought, two classmates,  Sagar Daryani and Binod Kumar Homagai, alumni-students of St Xavier’s College Kolkata and Momo lovers opened a stall shop selling delicious Momos in a 200 square feet garage back in 2008 in the capital city of West Bengal with a minimal team of only two chefs, Rs 30,000s investment and a small kitchen that never compromised with hygiene, taste and quality.

Like every other final year student, the duo best friends also started planning their careers with no concrete goals but only ideas that seemed vague and unexplored. They were even offered jobs but deferred all that came in way to just do something of their own.

“First, we thought to open a confectionary store or a bakery shop, but decided instead to venture into momos as I knew how to make it. When I shared this idea with Sagar, he jumped at it as this was no less an opportunity to turn our favourite dish into a business model.” Said Binod who is from Nepal in an interview with The Weekend Leader

Initial days were tough as Momos were not a staple food for Bengalis and people often hesitated to try something steamed that time. Therefore, the duo approached every passerby to try their Momos as free samples. This continued until the next two years where Sagar and Binod would wear WOW! MOMO Hats and T-Shirts and request people to generously try and review their shop’s Dumplings. This gave them a provision to improvise in both taste and quality.

“We faced several problems that knocked us down, but we came back stronger every time.” Said the two in an interview with The Weekend Leader

With a later investment of Rs 14 lakh after two long years of struggle, WOW MOMO came with their first-ever independent outlet in 2010 at Sector V, Salt Lake in Kolkata. Now it was just not a shop but a brand that was slowly gaining recognition.

Gradually people started to accept and recognize the duo as “Best Momo Sellers in Kolkata”. They opened similar shops at different places in Kolkata itself but something that marked a wave of progress was their first outlet outside Kolkata, in Bengaluru in 2011.

To bring street food into a fine restaurant was a big task for both of them and their team. Something which was available on streets and in half the price caused a lot of trouble to the duo to prove their customers but with years of consistency and excellent services WOW! MOMO, today, expanded in all big cities that include Delhi, Noida, Gurgaon, Mumbai, Chennai and many more.

Today, they own more than 150 outlets in India and specializes in more than 80 types of Momos and Dumplings. Very few people know that it was this particular brand that brought the concept of Pan Fried Momos and Chocolate Momos to Indians. The outlet was also awarded as the “Best Food and Agri Products” and “Best SME of the Year Award in 2013”. The Company’s Headquater is in Kolkata, West Bengal with more than 1000 employees under this one brand at different outlets and branches.

Had Binod and Sagar not tried to least give their vague idea a chance, we definitely wouldn’t have said “WoW” after every bite of their Momos. The two friends not just made their stupid idea worked but proved that nothing is impossible if you believe in yourself.

Chetan Bhagat Opens Up About Bollywood Bullies And Credits Sushant For Career: Interview With Times Now