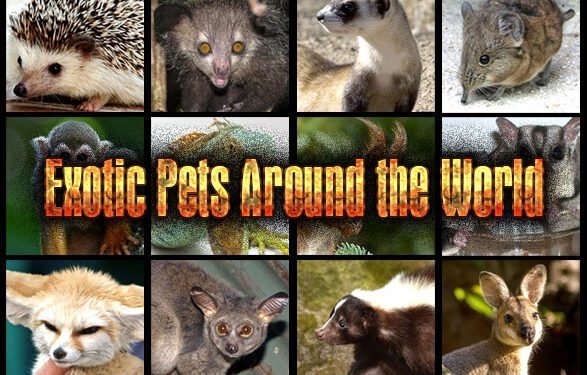 Pets are appealing creatures and having one around us can easily fix one’s mood and even life in general. It’s serene to see them waiting-ready to play and cuddle when their owners come back jaded from workWhile most people go for either a dog or a cat, there are a plethora of other exotic options that can fascinate in no time.

Top 10 Exotic Pets from all around the globe

The appearance of Wallaby is much like a kangaroo. That’s how they got the nickname ‘mini kangaroos’. Very common in Australia, they can be seen in other parts of the world as exotic pets. They need more outdoor space, one needs to make sure you’ve got it before getting one. Owing to this, in some cities, they’re considered illegal to own. Check that out as well. Wallace can grow up to 40 inches in height and weigh around 50 pounds, so they’re smaller in height than a kangaroo but will jump around just as happily and hit impressive speeds as well.

Simply adorable, Dwarf Pigs. Take them as pets or use them as blankets, they’re lovely and fun to have around. they are a very good pick especially for those who suffer from allergies. Considered to be hypoallergenic, so they’ll be the perfect friends for allergic people. Also known as Teacup Pigs

One who stays away from home for a longer time should think about getting them in a pair. As they love company. They are super social.

For the ones who like cats but also like dogs, the little fennec fox can rescue. They’re independent like cats and playful like dogs, with super cute ears that go on and on. They need higher maintenance than either cats or dogs, though – comes with a  lot of energy and thus need a lot of attention and exercise. Once they’ve bonded, they’re happy to cuddle when they’re in mellow mode. They’ll likely get on well with bigger pets you already have, like cats and dogs, but it’s important to inform.don’t let them near any loved ones who will fit in their mouths, after all, they are fox.

‘Not for Everyone, Obviously’ category is the tarantula. The good news is that they need pretty low maintenance; they just sort of hang around being arachnids, which is good because most breeds live from eight to 10 years. They don’t need a lot of space, but it’s necessary to provide places they can hide in. Or maybe it’s you who needs a place to hide from your strange pet?

All Thanks to mundane pop culture worship, kinkajous may have found a way to make a name for themselves among the typical cat and dog-loving public Kinkajou looks like a lovely little monkey, but more related to the Raccoons and the Coatimundi. They use their tail for climbing around and can be utterly social and well behaved if one properly raise from a young age.

With a lifespan of up to 25 years and love to explore the surroundings and new family members or guests. Besides, they tend to be more active during the night, so, have a perfect little friend for this night owl. Also, known as Honey Bears.

With a weight of up to 140 pounds, the Capybara is one of the biggest rodents in the world. One of the cutest animals we’ve ever seen. Their natural environment builds in water and, lives on diet grass. So make sure to provide them with places where they can swim around freely and easily as well.

Here the challenge is that they are a very social animal, prefer living in groups, so it’s advisable to get a pair instead of a  single one. Also, in some states, like in US states, one needs a special license to own one, so make sure to check out local registration before getting one.

Let’s get on the extreme side of pets, the Burmese Python is not for everyone. Particularly, for the faint of heart. Frightening as it looks, the Burmese Python is categorized among the most docile snakes around. They usually are in a good disposition and they only need basic care, so it’s an easy choice to make. Take them if truly love reptiles.

One thing to consider is its potential size. They can grow quite large, sometimes over 20 feet and weigh even over 250 pounds. Think, Think twice if one owns the heart and space for such an exotic pet.

One of the most common breeds found as pets are the African Pygmy Hedgehog. The Hedgehogs are little, cute, adorable, and make for special pets. With an average lifespan of up to 10 years if nurtured properly. Heir care is just like a hamster or guinea pig. Just need is a cage, food, water, and a nice place to hide and a little toilet. The owner should be a  night owl because Hedgehogs are night creatures.

Chimpanzee might be attractive for pet lovers but prove to be a difficult pet,  they live up to 50 years or more, one needs to commit for such a long time. A mature male chimp usually grows up to 150 pounds and can be twice as strong as a human being. Sometimes even stronger.

For those who would like to have a Leopard as a pet, the Bengal Cat is their best option. It’s like a Leopard in miniature, due to their extremely popular fur. Their fur comes in a  variety of patterns and colors. One can find them in Brown, Silver, Snow, or even Blue.

The Bengal Cats are active animals. One can get to play and get tired daily. They are very sociable creatures, so they tend to get along with other furry members of the family. Again one needs to have one more friend like that.