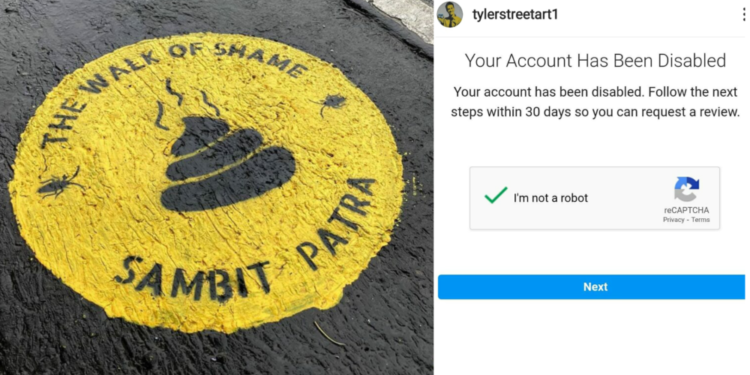 Mumbai’s street artist Tyler who recently made headlines for his “Walk of Shame” featuring first Arnab Goswami followed by Sambit Patra, Sudhir Chaudhury, Kangana Ranaut and many others has now revealed that his Instagram handle has been taken down.

Tyler’s account got suspended just at the duration of 48 hours after Priti Gandhi, National Incharge of Social Media – BJP Mahila Morcha slammed the act, taking it to Twitter.

“This is the lowest it can get! A shameful slander campaign is being run on the streets of Mumbai against private citizens on public property!! Use as much PR machinery as you want, you can’t suppress the unified voice of the people!! Shame on you!!” Priti Gandhi Tweet read.

Actress Kangana Ranaut too shared her disappointment about her name being written this way, calling it a “derogatory act” by Tyler. On August 15th, Tyler had taken to Instagram and written “Starting this Independence Day, names of the most shameless figures across industries like Journalism, Politics, Bollywood, etc. will be painted on streets in Mumbai. The names will be selected by people via online voting. Comment below with the name of the person you think should make it on ‘The Walk of Shame’. Names which are repetitive in comments will then be entitled to the voting lists.”

An initiative that was run to keep the idea of dissent high and youth vocal about certain fallacies has now come to an end after the suspension of Tyler’s account. According to Tyler’s interview with Vice, he had revealed that the only idea behind the initiative is to connect people, by calling out the shameless public figures in the most non-violent way. “To muzzle the voice of dissent, several students and activists are constantly being targeted and thrown in jail even amidst COVID-19 lockdown” he stated.

The Desi “Walk of Shame” was actually inspired by the Hollywood “Walk of Fame” in which the five-pointed terrazzo and brass stars on Hollywood Boulevard in Los Angeles honour personalities from music, film and Television. Inspired by the same concept Tyler too created a version so “chucklesome”.

Life Lessons Taught By COVID-19 To The Indians

Life Lessons Taught By COVID-19 To The Indians