Book Review: “We” by Yevgeny Zamyatin 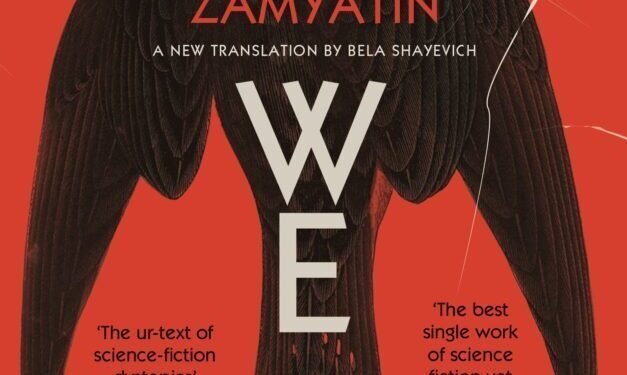 The masterfully woven dystopian classic, We, is the groundbreaking novel that inspired the likes of We, 1984, etc. The narrative is woven around D-503, a spacecraft engineer who is handed the responsibility of making a spaceship, The Integral. We understand the functionality of the totalitarian fascist society through his journal entries, making it reflective of his inner most thoughts and emotional outpouring. The protagonist is a tiny happy cog in a wheel in One State, a futuristic prototype of a government which regiments unit members of society with mathematical precision. All the members are numbered instead of named, habituating in a perfectly organized geometrical glass city where even most mundane of their activities are scheduled and planned out, to be performed at a precise time, like a clockwork; regulation to the point of absurdity. One State follows total surveillance over individuals.

To be fair, the premise of the world is quite horrific, blatant brainwashing with propaganda and coerced submission to absolute authority either by feR of punishment or by threat of enemies. The narrative delves into deeper questions as it progresses. What defines collective identity and individual identity? What is freedom and happiness, in context of each other? What triggers revolutions?

Zamyatin attempts to paint a bleak picture pondering over these questions.

The writing so wonderfully mirrors the mental state of the confused protagonist; reflective of anxiety; it’s fractured and chaotic as he descends from functioning as a mathematical robot to being an emotional rebel; colliding headfirst into inner humanity. The prose is laden with metaphors, almost poetic in its description of seething turmoil that constant soul searching and confusing monologues brings. So much so, that, for a while, the plot becomes the background.

The real achievement is the impeccable world building. We percolated so deep in pop culture that it’s direct influences can be seen in The Hunger Games series and Divergent series.

The detailing is masterful which is why it seems like monstrous nightmare that maybe close to reality. Zemyatin will make you realise how underrated your current freedom is, how valuable a free society is. The conjured up world is extremely believable and somewhat accessible in its form. We succeeds wonderfully as a reaction(and a critique) to the socialist scientific utopias constructed by H.G. Wells. It can also be considered as a fictitious meta critique of the Soviet totalitarianism. We demonstrates the absurdity of a scientific utopia with nuance and honesty. Which is precisely what makes it horrific and engrossing. I’d recommend it, for the love of dystopian fiction and freedom.