by Nashra Nisar
in Infotainment, News
0 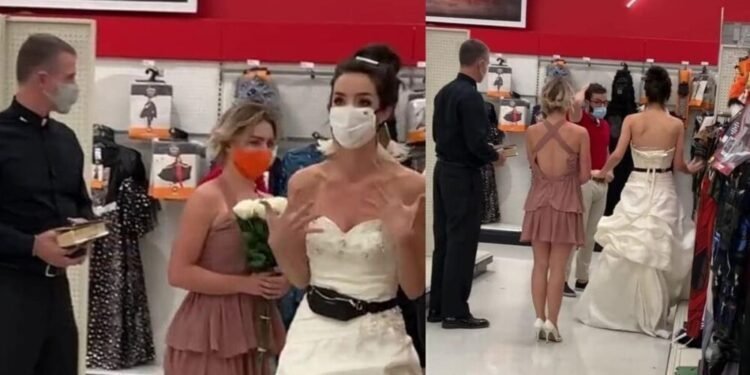 It’s totally understandable that engaged couples are often excited about their wedding and decide whether they want to wait or marry right after the event. It’s totally their own decision but what happens when these two people are totally on a different page? That’s what happened in Las Vegas, which can be considered uncanny and invited a lot of attention as the video surfaced amongst the netizens.

Two videos have gone viral in which a girlfriend wearing a wedding gown is seen giving her fiance an ultimatum at his workplace and shouting, “You put this ring on my finger two years ago and it’s time to do it or get out. We’re getting married right now or I’m leaving. I’m out. I’m done. I’ve brought a pastor, I’ve brought Emily, she’s my bridesmaid.”

The woman also bought a bouquet of flowers with her to notify his mate that whatever scene that has been created is no fake but real and she is on a serious side. She even warns her boyfriend that if he refuses this time, there is no hope of getting back in future and she’ll call this relationship a big fail and break it right away.

This is the goofiest shit I’ve ever seen in my life. If you gotta show up to a man’s job in a Dillard’s dress trying to MAKE him marry you on the spot or else you’re leaving him, that man does not want to marry you.

Howey, there is no information about what happened when they left the store but this bizarre event got plenty of attention on Twitter. Many said that the women wanted a lifetime commitment but the man does not want so, while others commented that it is a red flag for the man to get out of it.

Honey if you got to pull this stunt rolling up on someone's job dragging the pastor and bridesmaid in tow, then baby girl you got your answer. Have some pride, carry yourself home and get out that dress. Next, find something productive to do and keep it pushing!

Throughout all this event the man was quite fearful and confused because of the unforeseen ultimatum from her girl that fell into his lap from nowhere.

RR’s Riyan Prag Celebrates The Victory With The Bihu Dance

RR's Riyan Prag Celebrates The Victory With The Bihu Dance