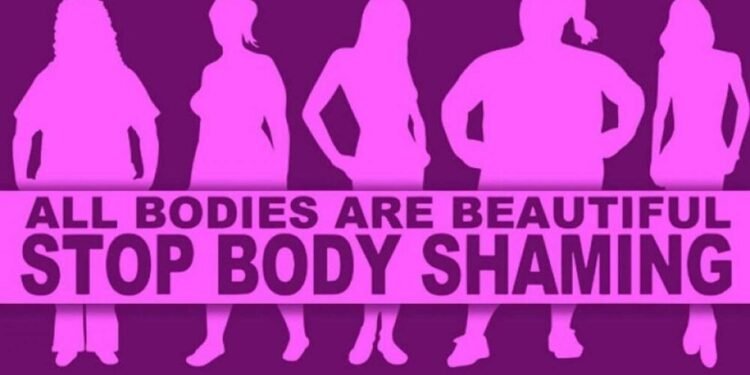 World Mental Health Day is observed every year on October 10th with the resolution of globally educating people about mental issues and fighting the social stigma.

While Indians always have a way to get away with their mockery and jests over sensitive issues, body-shaming is one such aspect which is all-round being used daily at homes, in school and in the society.

A fat friend in school you called a “cow” or a skinny friend of yours whom you used to call “khamba”(pole) are a few of many examples of how people are body shamed.

Body disgracing is a situation wherein an individual is embarrassed about his/her physical structure. In this situation, the individual gets over possessive about his/her shape and begins to seclude themselves from society.

Why is it important to talk about body-shaming?

Issues like body-shaming are structurally embedded in our society. Unconsciously, people pass remarks that go a long journey in moulding the way a person views himself.

Shape disgracing is drilled in pretty much all aspects of society. While racism has been talked about numerous times and ways in which it is endorsed, the right features and posture, weight and height are all used to body-shame a person.

Individuals love to mortify and taunt others. They don’t have a clue the amount it can influence the other individual. These are a few different ways by which build disgracing can impact your well-being.

While body-shaming is a social issue, it is a psychological tool. The growing attraction towards beauty norms and ideal weight in the age of social media has led to an elevation in depression and various other disorders.

Psychological records show a growing rate of depression among teen girls with the advancing use of social media. How are social media and body-image connected? How is our well-being affected by body-shaming?

1. Picture of their own body

Netflix-movies-social media. This is the cycle where teen revolves day and night. This is also the facade of ideal beauty and body standards. It is the place which nourishes on delineated norms recognised as attractive and ideal.
According to the British Association of Model Agents, the minimum height for a female should be 5’8, which makes the most acceptable range being 5’9-5’11. The women should be approximately 115 pounds and should measure, bust to waist to hips, 34-24-34 at 5’9, this makes for a body mass index measurement of 17. 18.5 is where women become infertile and ill. 16 is where the WHO says it gets severely dangerous. 15 is where they often die.

So basically, models are dehumanised in the industries to fit into a notion of beauty that begins a vicious cycle of insurmountable ideal body type.

Above all else, what is self-perception? It is the image that an individual has for his/her shape. At the point when individuals begin ridiculing or mortifying an individual for their appearance, they start to lose their self-perception. They start to think about their body as a weight. They quit glancing in the mirror. Continuation of joke or mortification can now and then prompt self-destruction.

Another psychological impact is only bringing down regard. At the point when individuals mock somebody about his/her build, they begin to lose their confidence. It can get hard for them to contemplate their body. They start to disengage themselves from society, quit taking a gander in the mirror, and here and there, they end it all.

In the UK, One in eight adults experiences suicidal thoughts or feelings because of concerns about their body image. Among teenagers, 37% feel upset, and 31% feel ashamed in relation to their body image.

Coming to India, 60℅ of the girls have a low- body esteem. Around 65℅ even dodge events with family and friends due to the same.

Three-fourths of the girls with low self-esteem engage in negative activities, such as disordered eating, bullying, smoking or drinking, according to journal buddies.

Another hazardous impact is nervousness. In this issue, the individual builds up a feeling of dread inside them. They become terrified of conversing with individuals; they feel timid about leaving the house and face different side effects. Ceaseless uneasiness can cause alarm assaults, over the top habitual issue, and some more.

They develop this complex where they feel the eyes of others are belittling them in the way they are. It is really difficult to overcome this mindset and be perfectly okay with your body image. Camera and beauty effects have topped up to the already heightening destruction of real body image.
If you think it is all alien to us, upload a picture of your friend raw and without filter from their account, and see how they react.
Yes, it is there subconsciously expanding its notion into our brain where a raw image of ourselves is something to be ashamed of- or something that is not fitting to the standards of this era.

“Any time there is public discussion about women and weight, I see patients picking up on it, talking about it, fretting about it and I see their symptoms spike.”-
Josh Zimmerman, MD adult psychiatrist with a focus on treating patients with an eating disorder.

Constant taunting about an individual’s build and shape can prompt anorexia. In this issue, the individual out of nowhere quits eating. This wonder produces an intense loss of their body weight. These individuals become extra conscious about their body weight and attempt to get thinner by receiving different strategies.

To burst you out of your balloon, One study determined the rate of anorexia nervosa to be ten per 100,000 in Indian males and 37.2 per 100,000 in Indian females- but both the eating disorders are almost unstudied in India and people take this illness as alien to India when in fact it is gradually growing and to cater it, we have only a handful of PSA psychiatrist.

Bulimia, then again, is confusion where individuals will, in general, eat more. They become over conscious about their weight and feel that they are excessively flimsy for the general public. They begin to eat so much that they lose command over their eating regimen. They likewise accept that they can shed pounds by heaving. Because of this, they eat wildly until the second where they can upchuck.
Psychiatrists claim that in the past few years, the figure of eating disorders has increased from anything between five and 10 times. What is more worrying is that girls of younger age are falling prey to anorexia and bulimia.

Seniors are more inclined to shape disgrace. They are embarrassed and taunted at each purpose of their life because of these focuses:

· They need the help of wheelchair, walker, etc

These are on the whole indications of maturing. We should not deride a senior for these things. They can lose their confidence more rapidly than a grown-up. They are more inclined to disconnect themselves from society.

The psychological impacts are a lot of unsafe than the physical ones. The physical ones can be relieved, yet the psychological ones are tough to fix. It can here and there prompt lasting mental impediment. You can help individuals improve their well-being in any case; you ought to never condemn or mortify an individual for their looks. Everybody is flawless in their manner. We ought to acknowledge everybody. Mortification and analysis can prompt risky results like anorexia, bulimia, wretchedness, uneasiness, dread, low confidence, debasement of self-perception, and some more. The individuals who are confronting these issues must overlook the individuals and focus on their way of life.

Prevalent lies that we have been told about other Girls