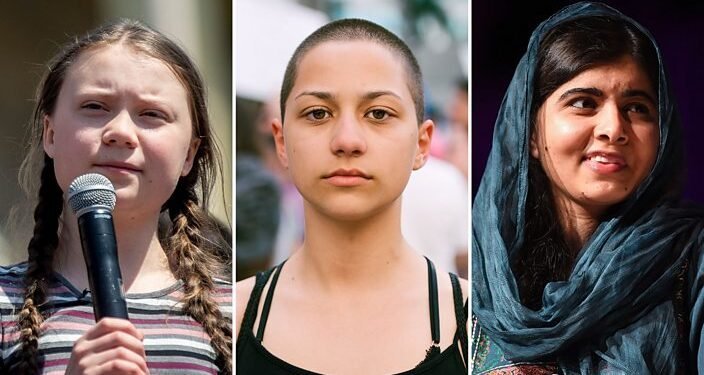 Mob rushing to succumb HER to death. In the womb, she is fighting off the pressure to breathe while her mother shouts, “you cannot part me, with a part of me”. It’s a wheel of life, if you break it here, you won’t get life in any form”. “Holy crap! She’s none but a burden on my son’s share of the meal. What the hell am I going to do with this daughter of mine”?

Today from the desk of TSA, we bring you the revolutionaries who are at a very young age has marked their place in setting the bar of right thinking. Some have passed away, struggling for the same cause while many of their predecessors are still working on making this world a better place.

It is high time to celebrate some of the extraordinary girls who are shaping our world. Here are some young girls who should be known for their grit and determination.

“How wonderful it is that nobody need wait a single moment before starting to improve the world”.

Though she has captured her mundane activities in her diary entry, the content has become a valuable asset to history. ‘The Diary of a young girl’ has published in more than 70 languages worldwide. Her writing is a first-hand account of world war phase. A young Jewish girl, hiding in Amsterdam and fear for her life, had written a diary which would shape the view of millions as to the meaning of the Second World War, the Holocaust, and the history of the Netherlands under German occupation.

“When the whole world is silent, even one voice becomes powerful.”

She hails from northwest of Pakistan, known for human rights advocacy. At the age of 11, she wrote a blog under a pseudonym for the BBC Urdu detailing her life during the Pakistani Taliban occupation of Swat that in turn was made into a documentary by New York journalist. She came into limelight when a Taliban terrorist targeted her to shoot while she was going to school. The attempt on her life sparked an international outpouring of support for Yousafzai. Soon after her recovery, she became a prominent activist for the right to education. She co-authored the book “I am Malala” an international bestseller. In 2014 she was the youngest Nobel peace prize laureate. Since then she is actively working for youths from various platforms. The Time magazine features her in the list of ‘Most influential people’ globally.

“We showed that we are united and that we, young people, are unstoppable.”

A Swedish girl who is an environmental activist started to appear in public in her teens. She calls for a school strike for a climate change outside her country’s parliament all alone. No sooner had she began, it was turned into a mass movement. Thunberg was called to address the 2018 United Nations Climate Change Conference. The changeset off from home. She made her parents avoid taking flights in order to reduce their share of carbon footprints. Her influence on the world stage has been described by The Guardian and other newspapers as the “Greta effect”. She has received numerous honours and awards including honorary Fellowship of the Royal Scottish Geographical Society; Time magazine’s 100 most influential people and the youngest Time Person of the Year; inclusion in the Forbes list of The World’s 100 Most Powerful Women (2019)and two consecutive nominations for the Nobel Peace Prize (2019 and 2020).

“I dream of a world where issues like child marriage, trafficking and any form of abuse won’t be there. Children will have wings, won’t be afraid of anything and can reach the skies”.

Anoyara Khatun is a daughter of West Bengal, has risen from below poverty line. In her early childhood, she was transported to New Delhi as a domestic worker. She escaped the system and breaks the shackles. By looking at the plight of her community children, she collaborates ‘Dhagagia Social Welfare Society’ intending to save child rights. Within a short period of time, Anoyara helped to reunite 180 trafficked children with their families, stopped nearly three dozen child marriages, rescued 85 children from child labour and got 400 children back into school.

Anoyara has been facilitated by Mamta Banerji (CM of West Bengal). Her name was among the nominees for International Children’s Peace Prize. On International women’s day 2017, she was conferred India’s highest civilian award for women, the Narishakti Puruskar. She also participated in the United Nations General Assembly in 2015 and 2016 as an advocate of children’s rights.

“We need involvement of first Ladies, mothers, School owners and all change-agents to ensure that the girl-child is allowed to have quality education and acquire skills that would make her a wholesome person to herself and the nation at large.”

Zuriel Oduwole is an African-American youth educationist. She is well known for her film making skill at such tender age of 12. She works on the education of girls in South Africa. Within this span of time, she has managed to meet 31 presidents and prime minister of Africa. In February 2015, Elle Magazine listed her in their annual feature of “33 Women Who Changed The World”. Currently, she is a speaker at various universities.

“We didn’t want to wait until we were older to stand up for what we believe in.”

In 2013 two sisters from Indonesia went on hunger strike to gain the attention of then-governor of Bali. They were of 12 and 10 years old when they began a campaign to get rid Bali of single-use plastic bags titled ‘Bye Bye Plastic Bags’. The campaign resulted in Pastika signing an order to ban styrofoam, plastic bags and straw from the island effective 2018.

All the above-mentioned youth revolutionaries have taught us great lessons.

Out of many subtle messages, one of them is that your gender, region, religion, caste, class or whatsoever ridiculous factors you consider, should not come in a way to define you and your cause.

Age is just a number. The greatness comes in all size, shapes and gender. Whoever you are, whatever your age is, doesn’t matter at all. The main concern is to be able to look for positive changes.